Through a series of cooking classes specializing in different kinds of Jewish cuisine, chefs-in-training will learn how to host Jewish holidays, introduce new recipes and techniques to their friends and family, and carry on Jewish cultural tradition through the culinary arts. Participants may receive micro-grants to host holiday meals in their home, build on the friendships made in class, and show off their new culinary skills. Jewish Cooking Mastered will support holiday meals for Passover, Rosh Hashanah, and Yom Kippur break fast.

Optional programming designed to continue the learning process will be held between monthly cooking classes. These programs may include cheese board assembly, mixology, knife skills, and food tours of local Jewish-owned restaurants.

Jewish Cooking Mastered is a program of EntryPointDC at the Edlavitch DC Jewish Community Center. This program is funded by The Jewish Federation of Greater Washington and The United Jewish Endowment Fund.

Keep an eye on this page when we announce our late spring 2023 class – and scroll down to see what we’ve made in the past.

Greg Herring graduated from the Jerusalem Culinary Institute culinary and patisserie programs in 2012. He is the former head chef of Hillel at Virginia Tech and has completed the intern program with Dickson’s Farmstand Meats in New York. He is the current owner of Co2NegativeMeatCo.

Susan Barocas is a writer, cook, cooking instructor and speaker with a passion for healthy cooking, Jewish food and Sephardic food, history and culture. Founding director of the innovative Jewish Food Experience, she served as the guest chef for three of President Obama’s White House Seders. Her work as appeared online at sites including The Nosher and in the Washington Post, Moment and Lilith magazines among other outlets. A member of Les Dames d’Escoffier international culinary society, she has made many food-related appearances on television and radio.

Valerie Zweig and Taryn Pellicone, the gals behind Prescription Chicken, started delivering soup to hungry bellies throughout the Washington, DC area in September of 2016. In addition to being soup aficionados, Valerie and Taryn are cousins who have strong hospitality backgrounds. They channeled their love of all things chicken soup to create a business dedicated solely to churning out bowls of liquid gold. You can find their soups in DC and Philadelphia and in grocery stores from Virginia to Connecticut!

Jeffrey Yoskowitz is a food entrepreneur, a writer, and a revivalist of Jewish heritage cuisine. He co-authored The Gefilte Manifesto: New Recipes for Old World Jewish Foods (Flatiron Books 2016). A co-founder of The Gefilteria, which re-imagines Eastern European Jewish cooking, Jeffrey travels the globe speaking, cooking, and teaching. His writings on food and culture have appeared in The New York Times, The Atlantic, The New Republic, Tablet, among others. He teaches culinary anthropology at The City College of New York and serves as chef and scholar-in-residence for a Jewish culinary heritage tour of Poland he developed. He has cooked as a guest chef at the esteemed James Beard House kitchen and was named to the Forbes Magazine 30 under 30 list for Food and Wine, as well as The Forward 50.

Liz Alpern is co-author of The Gefilte Manifesto: New Recipes for Old World Jewish Foods (Flatiron Books, 2016) and co-owner of The Gefilteria, a food venture that’s been reimagining Old World Jewish Foods since 2012. She is also the creator of Queer Soup Night, a global event series highlighting the talent of queer chefs and raising funds for locally-based social justice organizations. Liz received her MBA from Baruch College’s Zicklin School of Business and is on the faculty of the International Culinary Center’s Entrepreneurship program. Her passion for food extends to the world of food systems, and she serves a consultant for national non-profit organization, Fair Food Network. Liz has been featured on the Forbes 30 Under 30 List and was selected for The Cherry Bombe 100 in 2018.

The Gefilteria is a cutting-edge food venture at the forefront of the Jewish Food Renaissance. Since 2012, The Gefilteria has been innovating and collaborating, cooking, educating and producing Jewish food and experiences all around the world. 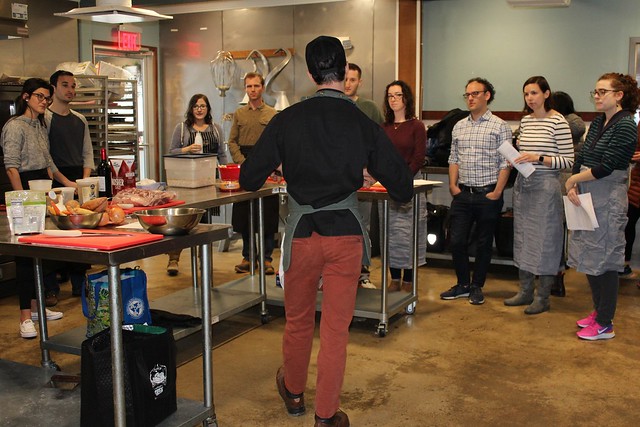